The title may sound like a foregone conclusion but this is actually very much a challenge, an experiment for me really.

I have made today a content writing day. The idea for having a dedicated content writing day on this particular day came from Dan Norris who's using it as an experiment for a book he's currently working on called Content Machine.

I'm generally not a content writer. Back in those distant past times of my school and university career, I think my least favourite task was to produce words. In any form really. The word "essay" fills me with dread, although possibly not quite as much as "creative writing" - the horrors of education!

Just to make my content day even easier still, I managed to start it about an hour late. It's the first time I've started my working day late so far this year. Unfortunately my youngest son got conjunctivitis and a temperature yesterday meaning that I didn't get to bed until about 1am. This is on top of several nights of pretty disturbed sleep thanks to him being rather snuffly. So I failed to get up early enough to shower and get ready for the day before having to help herd the children out of the house for school. As it happens today even the herding was harder than usual thanks to my daughter being in a flap about a wobbly tooth (which did actually fall out with a little encouragement while brushing) and some general over excitement thanks to the snow! 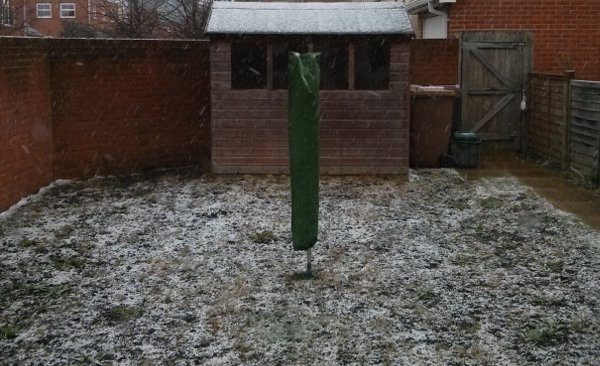 So this is going to be quite a challenge of a day. I'm not convinced I'll make it but I'm going to have the same target that Dan set of 10,000 words of writing today.

Just a quick aside on that number - 10,000 - I suspect I've never written that many words in a single day before in my life! I'm currently part way through the latest autobiography from Stephen Fry - squeezing it in around work, family, chores and podcasts is a slow process unfortunately. In that book Stephen talks about writing one of his novels and he seems to consider 10,000 words in a day a pretty good score, and I understand he's supposed to be quite a rapid writer; oh well.

I currently have a list of 11 ideas for documents that I could write today (including this one). I've produced this list over the last couple of days although several of the ideas are actually things I've been meaning to write for a while. Some of these documents will be blog articles (like this one) which I'll post here or elsewhere in the near future, but it also includes a couple of business documents that won't be shared publicly; so you'll just have to trust me on the word count I provide at the end of the day!

I'm pretty much going for the same basic rules as Dan did, for me these are:

Thanks to time zone differences Dan has already completed his content writing challenge (despite us both doing it on Thursday) and published all of his articles. Unlike Dan I'm not going to be posting all of my articles today, however I will return to this post in the coming days and weeks to record the articles that I did complete today. Here is the current list:

Dan wrote quite a lot in his article about how to achieve writing 10,000 words in a single day; including planning topics, avoiding distractions, being driven to write the content and typing fast. I can't say any of that better than he did, so I suggest reading his article if you want more details on those.

However he also talked about his actual process for writing, for typing out, the content. On this we differ a little, so I thought I'd document my own process here. I have used this process for a long time, I can't remember where I learnt it, for creating anything from presentations to business proposals to blog posts. Here's the process I follow:

That's it. I've finished my first article of the day and I've conquered 970 words already. Onwards to the next one!

While I won't be reading twitter much today I will be posting word count progress at various times so follow me there if you're curious.